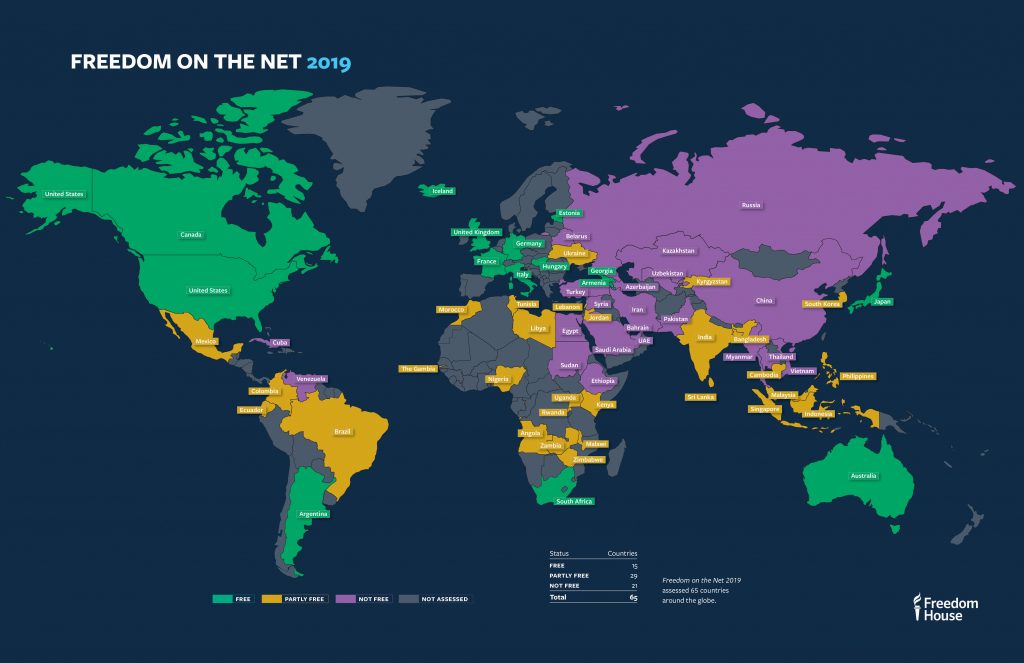 The Washington DC-based Freedom House’s recently released annual  internet freedom report Freedom on the Net 2019: The Crisis of Social Media is a sobering reminder of how digital platforms have become invaluable tools for governments to violate freedoms and to distort democratic processes.

Assessing internet freedom in 65 countries, including Turkey, the report goes far beyond usual examples of censorship and civil rights abuses.

“What was once a liberating technology has become a conduit for surveillance and electoral manipulation”, the report says.

With widespread social media surveillance and increasing use of disinformation and manipulation, the report warns that the internet is becoming a “Trojan horse for tyranny and oppression”.

The new menace to democracy is not limited to authoritarian regimes. Freedom House says that they found evidence of advanced social media surveillance programmes in at least 40 of the 65 countries they analyzed, including those with well-functioning democracies.

As for the use of disinformation, not only governments but populist politicians and their online supporters, government-friendly media personalities and businesspeople have also become the main culprits.

According to Mike Abramowitz, president of Freedom House, “Many governments are finding that on social media, propaganda works better than censorship”.

Freedom House’s 2019 report is critical of social media platforms, too, for their failure to protect media freedoms, prevent manipulation and guard privacy of their users.

In countries like Turkey, social media presents the only free information and communication channel for many. With 90 per cent of the media controlled by pro-government owners, with little or no space for independent journalism, the internet and social media platforms are the only space available even to media professionals.

But it is not difficult to see that among social media users, digital literacy and fact-checking skills are low, making problems even greater.

Despite the obvious risks of exposure to online surveillance, millions of people regularly use social media and the internet-based information channels in Turkey.

Turkey’s status in this year’s report was once again “Not Free”, closely following some of the worst offenders.

In addition to Turkish citizens facing investigations and arrests for their social media activities, being harassed online and some websites being blocked, the report has highlighted blatant government manipulation through an army of trolls trying to shape online discussions. Referring to the Reuters Institute for the Study of Journalism’s Digital News Report 2018, Freedom House said  that Turkey was saturated with fake news, too.

Since the compilation of Freedom House’s 2019 report, yet more disturbing news have emerged.

Recent steps by the judiciary banning critical news reports and comments on Turkey’s military intervention in Syria, or the government’s reported plans to criminalize financial data and opinions deemed to be harmful to country’s economy indicate that chances of an improvement in Turkey’s record next year are not yet on the horizon.