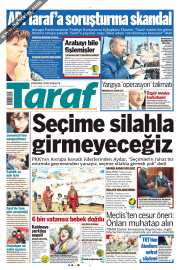 Monday the 9th of December was a good day for Turkey.

Following a Constitutional Court ruling last week that his more than four years of imprisonment without conviction was a violation of the law, journalist and elected Member of Parliament Mustafa Balbay was released by an Istanbul court.

In August this year, Balbay, who had been in prison since September 2008, had been given a sentence of 34 years and 8 months.

There are many more journalists in Turkey’s jails that have already spent years in preventative detention or sentenced to long years in jail following politically motivated trials.

I welcome Mustafa Balbay’s release and hope that it is the beginning of a process to reverse violations of free expression in Turkey.

The news of Balbay’s long-overdue freedom came while I was writing about another worrying development that I see as a direct attack on press freedom in the country.

Since 28th November, Turkey has been preoccupied by a leaked report published in the Taraf newspaper by one of its controversial journalists, Mehmet Baransu.  The document alleged that the government signed a 2004 National Security Council (MGK) action plan against the Islamic community of Fethullah Gülen.

The government did not deny the existence of the document but insisted that no action was taken against the movement.  It was also suggested by a senior government official that the file was leaked to Mr Baransu by a rogue element within the National Intelligence Organisation MIT.

The revelation by Taraf sparked a public row between the Justice and Development Party government and Fethullah Gülen’s supporters.

The Prime Minister’s Office, The National Intelligence Organisation and the National Security Council all separately filed criminal complaints against the daily Taraf and its writer, Mehmet Baransu.

In addition to demands that Baransu be charged under Anti-Terrorism legislation, the Prime Minister Recep Tayyip Erdoğan accused him of “sheer treason”.

The accused reporter, Mehmet Baransu has had a very objectionable attitude towards other journalists. The irony is I was writing my article to defend his right to disclose an issue of public interest.

He has written articles in the past about jailed journalists such as Nedim Şener that were used by prosecutors as evidence against investigative journalists. He was not the only one. Several prominent journalists have approved the long detentions and the very heavy jail sentences given to Balbay and others in similar court cases.

It was particularly disheartening to see how Baransu, under investigation himself, reacted to Mustafa Balbay’s release on Monday. He wrote in his Twitter account that he hoped  Balbay “would not initiate meetings of the  coup-plotters any more”.

There is indeed much to criticise about Baransu style journalism and its questionable ethics, which is so pervasive in the Turkish media.

Precisely for this reason, I believe it is important now to be vocal about defending Baransu and Taraf against attacks from the state.

The prosecution of journalists over the disclosures of leaked documents is a very topical subject of debate elsewhere in the world.

The British daily the Guardian’s publication of leaked files by a former contractor to the US National Security Agency, Edward  Snowden, exposing an extensive and intrusive surveillance and intelligence gathering operation, could also end up to be an offence under the 2000 Terrorism Act in the UK.

Last week, The Guardian’s editor Alan Rushbridger was called in to be questioned by the UK’s parliamentary committee on national security.

When asked by an MP whether he loved his country, Rushbridger replied that he and his journalist colleagues at the Guardian were patriots.

“One of the things I love about this country is that we have that freedom to write, and report, and to think and we have some privacy” he said.

The surveillance practices of intelligence agencies extend far beyond their original duty to keep their country’s citizens safe. Snowden revelations showed that the National Security Agency in the US was gathering about five billion records a day on the location of mobile phones around the world.

This kind of mass surveillance of phone, email, social media and text message data raises a serious issue that affects every one of us.

It is obvious that the current system of oversight and scrutiny of the intelligence agencies is not adequate and this level of state secrecy can lead to serious abuses.

It is the role of a free press in a democratic society to hold governments to account and to question whether these practices are justified and lawful.

In the case of Turkey, the media has an additional duty to investigate and expose undue influences and unlawful activities of faith communities such as the Gulen movement in the judiciary, police and intelligence agencies.

Those of us that believe in freedom of speech and the public’s right to know would condemn their persecution today.

However it is important to remember that the very same Gulen sympathisers has played an important role in persecuting other journalists,  also fighting for freedom of expression such as Nedim Sener and Ahmet Sik.